Blog
For those who are new here the theme of this blog is to record the many anecdotal back stories I, the author, encountered while researching the book about Norvel Lee.  I plan to update this by Friday of each week.  If you scroll down to the end of the blog and work your way up you can catch up to what preceded this week's post. 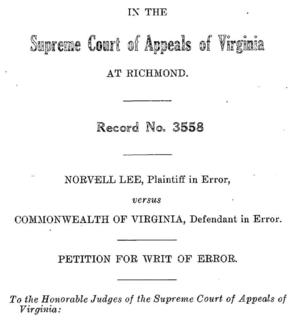 For those who are new here this is the third edition of my weekly blog, posted by Friday of each week.  Its theme is to record the many anecdotal back stories I encountered while researching the book about Norvel Lee.  If you scroll down to the end of the blog and work your way up you can catch up to what preceded this week's post.

Above is the image of the cover of the court documents relating to Norvel Lee's appeal of his conviction for violating Virginia's Jim Crow Laws.  The August 17, 2016, issue of The Fincastle Herald had an excellent report on that September 1948 legal case.  So much so, I couldn't help but to dig deeper into it.  The research began by making contact with Catherine O'Brion, Librarian-Archivist, with the Virginia State Law Library in Richmond, Virginia.  She located the documents for Case Number 3558, Norvell Lee v.  Commonwealth of Virginia, and arranged for digital copies to be sent to me.  Notice that Norvel was spelled with two L's on the official document.  During the many phases of researching Norvel's life I found several documents and newspaper articles that included the extra L.  However, his birth certificate (which I have a copy of) and his family members reiterated that Norvel's legal name contained only one L.

As soon as I received the fifty seven page document I read it in one sitting. It was compelling!  The first thirteen pages consisted of a summary of the facts and some legalize regarding positions from the prosecution (The Commonwealth of Virginia) and the defense (Norvel Lee).  Next were the transcripts of the testimony.  I was riveted by what I read.   I felt that the entire case could have been made into its own book but instead, when I decided to write NORVEL, I used it for the prologue.  Those of you who have read the book will know that it begins at the Alleghany County Courthouse.  The testimony in that opening scene is taken directly from the transcripts.

Part 2 of this fascinating episode will the subject of next week's blog.