Blog
For those who are new here the theme of this blog is to record the many anecdotal back stories I, the author, encountered while researching the book about Norvel Lee.  I plan to update this each week, hopefully.  If you scroll down to the end of the blog and work your way up you can catch up to what preceded this week's post. 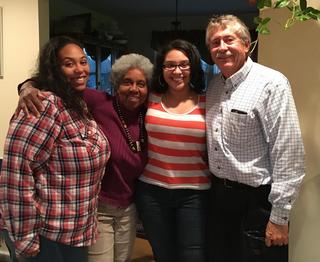 Last week's post described how I connected with Norvel's granddaughter Daryn Anderson.  After we exchanged numerous emails and a few phone calls she and I thought it would be beneficial for me to see the scrap books and other memorabilia the family saved over the years.   On Sunday, November 13, 2016, Barbara and I met the family for the first time at Margaret Russell's home in Maryland.

The photo above is from that first visit.  From left to right are Danielle Anderson, Margaret Russell, Daryn Anderson and me.  Those who have read the book will recognize Mrs. Russell as "Weekie."  She is the younger sister of Norvel's wife, Leslie, and the source of many of the family stories captured in the book.

One of the many qualities I love about my wife Barbara (too numerous to list them all here) is her ability to make sure everyone is comfortable in any situation.  She thought a great icebreaker would be to bring some Botetourt County goodies with us to acknowledge Norvel's connection to our area of Virginia.  She went to a local store (Ichenberry's) and brought some Gala Apples and other local snack items.  Gala, in the northern part of Botetourt County, is where Norvel was from.

When we arrived at Margaret's home in a beautiful tree-lined neighborhood we were greeted warmly by Danielle, Daryn, Margaret, and her son Bruce.  After they offered us beverages Barbara explained the story of the snacks we brought from Botetourt County.  I then introduced where I was on the project, indicated that this was likely going to be a book.  I asked and received permission to record the afternoon.   That recording is three and a half hours long (I just now checked the recording file, still saved on my computer).

During those three and half hours I got to know Norvel Lee personally.  Enough that I thought I could begin to try to capture his personality in words.

In my previous exchanges with Daryn I learned that Norvel had a pronounced stammer.  It was at this first meeting with the family where I learned that Margaret's sister Leslie tried to help him with it.  The fun scene in the book about her helping him was created from what I learned this day.

Next week I'll have more to say about visiting with the family.

I know I am jumping forward a bit, well a lot, but was wondering what kind of feedback or comments you have received from Norvel’s family after reading your book?

Great question. The family members have been supportive throughout the research, publication, and post-publication of the book. They are pleased Norvel's story is being told. Danielle and Norvel's nephew Ken attended the book talk, which served as a book launch at the Fincastle Library. Another granddaughter, Tiffany (cousin of Danielle and Daryn) who lives in Alaska and I communicate regularly. Norvel's grandson, Ricky, has read the book and is grateful for it. I'll have much more to say about the family and their support in future posts.

I always enjoy reading your post. Thanks Kenneth.
https://ingelsoong.com