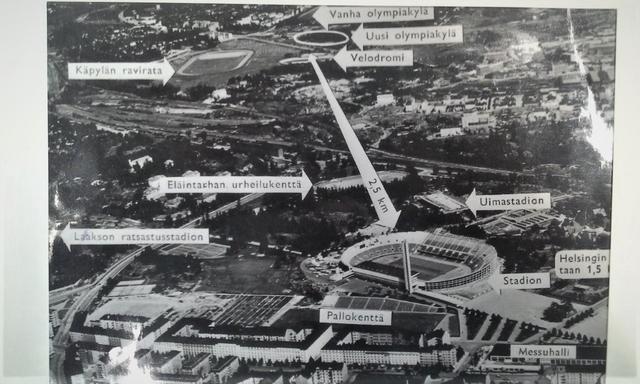 In the spring of 2018 I reached out to the International Boxing Research Organization (IBRO).  Their website says they were established in 1982 "for the express purpose of establishing an accurate history of boxing; compiling complete and accurate boxing records; facilitating the dissemination of boxing research information and cooperating in safeguarding the individual research efforts of its members by application of the rules of scholarly research."

I asked IBRO for any information they had on Norvel Lee, especially regarding the Dual's Tour and the 1952 Helsinki Olympics.  Shortly thereafter I received an email from Petri Paimander, Finland's boxing historian.  After a few email exchanges he sent me a series of emails with attached photographs and newspaper clippings (mostly in Finnish).  The image above is one such photograph.  The book has scenes set in several of the locations shown:  The Olympic Stadium, the Messuhalli - where the boxing events took place, and the Velodrome.  Those of you who have read the book will recall the Velodrome is where the athletes would go and socialize.  And the label "Vanha Olympiakyla" is the Olympic Village.

The information that Petri provided compelled me to obtain a copy of the official Olympic report published by the Finnish organizing committee.  It proved to be a wealth of information.  Later, I asked and received permission from the Sports Museum of Finland to use several of the photographs found in that report.

My communication with Petri only lasted about a month.  After our dialogue and information exchanges I was ready to continue with the writing and other research.  I reached out to him again when NORVEL was published but have not heard back from him yet.  I just want everyone to know the information he provided helped provide the descriptions and many anecdotal stories found in the chapters about those 1952 Olympics.