The Jacksons of Leesburg 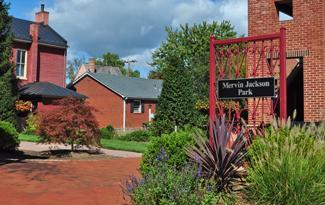 Through a series of improbable events that are described in NORVEL, Leslie Jackson and Norvel Lee are introduced by her brother, Robert Jackson.  They fall in love and marry in 1951.   Chapter 10 of NORVEL takes place at the Jackson family home on Ayr Street in Leesburg, Virginia.    This is where Norvel meets the family who become a significant influence on him for the rest of his life.

Margaret Jackson (aka Weekie), Leslie's sister, told many stories from her childhood when I interviewed her, including those about the diverse acquaintances the family had in the Leesburg area.    It was clear from talking with her that the Jacksons of Leesburg were well-liked and respected.  Her father and mother were active in the community and attended both the Methodist and Baptist churches.  There was not enough space in the book to tell all the Jackson family stories so I focused on the ones that directly influenced Norvel Lee's life.  But I did feel compelled to briefly introduce their cousin, Mervin Jackson.   The image above is of the charming park in the center of Leesburg named after Mervin Jackson.  He continued the Jackson's tradition of community service and serving on the Leesburg City Council.

While I was in the middle of writing Norvel, Barbara and I have made it a point to visit Leesburg.  We drove by the Jackson's Ayr Street home and, of course, walked through Mervin Jackson Park.  It was my plan to introduce NORVEL when published to active Leesburg history groups, but the pandemic has constrained those efforts so far.  If any of you reading this are aware of people in Leesburg who would be interested in this story I will appreciate you bringing the book to their attention.