The Back Story
For those who are new here the theme of this blog is to record the many anecdotal back stories I encountered while researching the book about Norvel Lee.  If you will scroll down to the last page of the blog and work your way up you can catch up to what preceded this most recent post. 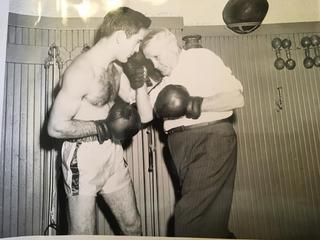 I can't say that I was an avid fan of boxing when I set out to write NORVEL, but I wasn't ignorant of it either.  I sparred a bit with a former Golden Gloves champion while serving in the Army and had watched some of the highly publicized televised matches when I was growing up.  And then of course there were the classic movies such as Rocky, Raging Bull, and Requiem for a Heavyweight where boxing served as the platform from which a story of an individual could be told.

Compelled to know how Norvel Lee became involved with boxing led me to learn more about the sport in general, especially the paths other young men took to become involved in boxing and the organizations that supported them.  I found plenty of print media information available from the early 1950's when Norvel was the national heavyweight champion for both the Golden Gloves and the AAU while on the Howard University boxing team. Using old newspaper articles and other sources I dug into the lives of boxers he encountered. I was looking for someone I could interview who knew Norvel at the time.

Those of you who have read the book will recall that in Chapter 11 (page 118 in the hardback) the boxer from Boston, John Boutilier, is introduced. "Bout" as he is known goes on to play an important role in subsequent chapters, especially the one on the 1951 Duals Tour in Europe.

Employing my first pass at research (Google) on the boxers who may have known Norvel I came across a 2012 obituary on John S. Boutilier of El Cajon, California.  It began with "Loving husband, father, and grandfather, remarkable teacher, athlete, boxer, artist, farmer, handyman, builder, golfer, party-giver, star-gazer, and hammock swinger." That description went along with the colorful newspaper articles that were written about him during his boxing days.  More importantly, in the obituary I found the names of his two children and subsequently connected with Lisa Telles, John Boutilier's daughter.

After the first email exchange with her I asked for any information she had on her father.  Here is what she sent me:  "I do remember my dad talking about boxing in Europe, but I don't recall if he ever talked about the specifics.  I will ask my mom when I see her this weekend.  The stories I recall were about the relationship between my dad and his father, who had also been a boxer.  We have two suitcases of memorabilia and newspaper clips from his boxing career."

The image above is on one of those clips:  John Boutilier and his father.

I will have much more to say about Lisa and her contribution to the making of NORVEL.  Those of you that attended the book talk I gave at the Fincastle Library will remember seeing her there.  Suffice to say she and her family will be lifelong friends of ours.

I love this story, and all the things said in the "Bouts" obituary were true. He was all of those things.

My mother and Betty Boutilier are 1st cousins. As a kid we visited the Boot ranch whenever we visited my uncle Mel in San Diego. My memories of John “Bout” were that he was quite a character and loved listening to his stories!

Sign up for the free Zen of Ken Newsletter here